Dr. Dylan Arena is the Co-founder and Chief Learning Scientist at Kidaptive, a company that brings Adaptive Learning into educational products, utilizing the latest in Learning Science to craft Personalized Learning Experiences.

On June 5th, Kidaptive was featured as part of the AI Time Journal AI for Education 2019 Initiative in the list 10 EdTech Companies Enhancing Education and Learning through AI.

The companies selected in the list apply AI in different ways to benefit students, learners and the educational sector at large.

In this interview Dr. Dylan Arena shares insights on how AI can help to solve or mitigate some of the biggest challenges of the educational system.

What is your background?

My undergraduate degree was in Symbolic Systems, which is an interdisciplinary program involving Computer Science, Psychology, Philosophy, and Linguistics. I came into school with college credits from high-school work I’d done, but rather than graduate in three years I spent the fourth year getting a master’s degree in Philosophy. Then I joined Oracle Corporation as a software developer, but I quickly developed repetitive strain injuries (RSI) that made clear that I had no future as a coder. So four years after graduating, I returned to school for another seven years, earning another master’s degree (this time in Statistics) and a Ph.D. in Learning Sciences and Technology Design.

My doctoral-research focus areas were game-based learning and next-generation assessment. I had planned to become a professor, teaching experimental methods and statistics courses while designing and testing educational games to support learning about all kinds of things. A year before I finished the program, though, I met PJ Gunsagar, who convinced me that we could help a lot more learners by starting a company than I could through academic research and teaching.

How was Kidaptive started? What is Kidaptive’s mission?

PJ Gunsagar decided to found Kidaptive when he recognized the disparity between the incredibly engaging animated features that his company Prana Studios was creating for Disney and Pixar and the educational applications that were available for his young daughters. Gunsagar believed that there was a way to create compelling educational content that was as engaging as the movies he’d been making and informed by the latest scientific understandings of how people learn. So, with the blessings of his Prana co-founders, he left that company and convinced me to join him in founding Kidaptive in 2011. Our path has evolved over time from creating our own content to powering content created by others, but our mission is still to empower learners of all ages, and their parents and teachers, by creating a vibrant ecosystem of personalized learning experiences.

What are the major challenges in the educational system today?

One fundamental challenge of the modern educational system is to reconcile the mismatch between the diversity that learners bring into the system—the wide range of experiences, supports, capabilities, limitations, preferences, passions, and goals—and the uniform outcomes that the system demands.

How can AI technology help solve or mitigate them?

AI could be used to address this challenge in two ways. One would be to optimize each learner’s path toward the current system’s uniform outcome. A healthier and more ambitious alternative would be for AI to help learners blaze their own paths to the right outcomes for them, which might differ substantially from other learners’ outcomes.

In either case, a responsible application of AI technology would have several key features:

There’s a clear opportunity for AI to help give meaning to the torrent of data being generated as students move through the current educational system,

What are the major opportunities brought by AI in Education today?

There’s a clear opportunity for AI to help give meaning to the torrent of data being generated as students move through the current educational system, but doing so requires much more domain knowledge about education and psychology than is sometimes assumed by technologists and others who assume that the magic box will somehow find the answers on its own.

How can teachers prepare for an AI-powered education?

It would behoove teachers to get behind the curtain, so to speak, to understand how AI technologies work. Demystifying the technology could serve to assuage fears and empower teachers to push back against inappropriate uses of AI in education (of which there are unfortunately countless examples).

Which AI technology do you think will have the biggest impact in Education in the coming years, and why?

Deep learning’s role in supporting natural-language processing will lead to important advances in human-computer interfaces that will reduce the centrality of screens to digital educational experiences. Sweeping screens away can and should help students and teachers return to interaction patterns involving much more face-to-face communication. In other words, as computers get better at understanding what we mean when we speak, we’ll be able to talk to them and hear their responses, which will let us turn our attention away from screens, keyboards, and mice and back toward each other, where it belongs.

How should educational system management software adapt for the advent of AI?

Do you see threats of inequality in the access to AI-powered education?

Absolutely: The Matthew effect in education has consistently led to advances disproportionately benefiting those who are already privileged.

What are the current technological limitations of AI which, once overcome, could bring massive improvements to the educational system?

Where do you see AI for education in the next 5-10 years?

As discussed in my previous response, natural language processing will have improved enough to reduce the extent to which teachers and learners have to depend upon screens to communicate with computers. The more conversational interaction patterns made possible by these advancements should replace at least some isolated screen-facing work with more peer-to-peer and student-teacher collaboration.

Another significant change is that adaptive learning will have moved through Gartner’s trough of disillusionment onto his plateau of productivity. In other words, we will have gotten over our disappointment that the magic AI boxes didn’t live up to their hype; we’ll have found ways to make productive use of what adaptive learning actually can do to help learners.

This doesn’t, of course, mean that we won’t by then all be excited about some new technological innovation that promises to cure education’s ills. Radio, television, personal computers, the Internet, mobile devices, AR/VR, and AI have all had their turns as supposed tech saviors of education. I doubt that we’ll suddenly recognize that we’ve been fooled every time and that we should stop believing in technological silver bullets. 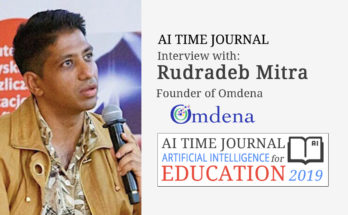 AI for Good: Interview with Rudradeb Mitra, Founder of Omdena 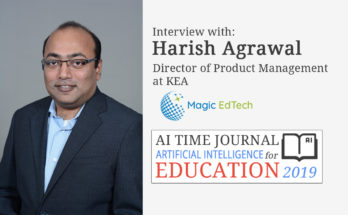 AI for Education: Interview with Harish Agrawal, Director of Product Management at KEA 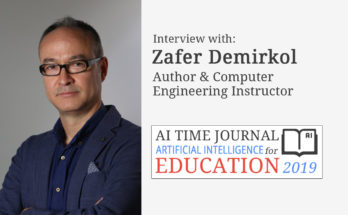